The first book in the Arrington Family Series, Cooking up Love is FREE while I write the last book in the series. My Kinda Girl. No release date yet, but I’ll keep you posted. Its FREE everywhere ebooks are sold except for Barnes and Noble (Nook). I tried…they said no. However, you can still download the epub version on your Nook from Smashwords and All Romance Ebooks. The buy links are after the excerpt. If you already have the book, spread the word for me. Happy reading! 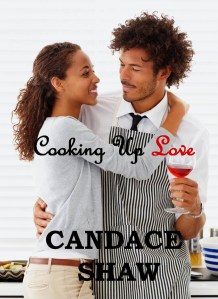 What happens when a suave, handsome chef meets a cute, sassy food critic?

When Shelbi Arrington accepts a position as a food critic in the hopes of burying her medical career and foregoing her residency, the last thing she’s searching for is love. However, that’s just what the doctor ordered especially when she lays eyes on the handsome chef, Justin Richardson. While sorting out her secret conflict of continuing her medical career, she falls for his mouth-watering charm, leaving her hungry for anything he has to offer.

A little background information for this excerpt:  Food critic, Shelbi Arrington, has already dined at Lillian’s Dinner and Blues Club. However, the executive chef/owner was on vacation at the time. She’s now returning to interview him for an article for The Memphis Tribune.

Shelbi entered the kitchen and was engulfed by the delectable aromas. B. B. King and Lucille roared through the speakers of the iPod dock on the shelf above the stove. She recognized the song from her dad’s B.B. King record collection, “Caught a Touch of Your Love.” The chef, whose back was to her, sung off-key, but it still made her smile. She didn’t want to disturb him, especially when he turned the music up and sang into the spoon. She placed a hand over her mouth to muffle a giggle.

His crisp jeans showcased his thighs and butt, relishing the fact he was quite muscular and probably athletic. His broad shoulders filled out the white chef jacket he wore. The chef’s hat was tilted to the side and waved back and forth as he danced. He gyrated his hips to the song as he stirred something in the pot. As much as she enjoyed his performance, she interrupted him.

She cleared her throat and tried to hide another giggle.

The chef turned off the king of blues, took off his hat, and twisted his muscular physique toward her.

Shelbi’s heart raced as her breath caught in her throat. Falling back on the door to steady herself, her stomach tightened and a heat wave charged through her. The man she tossed and turned over last night stood in front of her appearing even more delicious than yesterday.

“It’s you! The man from the trolley.” She ran her fingers through her hair and hoped she didn’t look like she felt—completely flustered.

“Yep. One and the same,” he said, flashing a million-dollar smile. “Come sample this caramel sauce and tell me if it needs anything else.” He held out the spoon for her. “I’m experimenting with you today.” His lowered voice held a hint of seduction.

A sensuous shiver raced through her. She tried to remain composed, but how could she when this fine masculine man stood before her with a sexy smile, succulent lips, firm chest and wild, crazy hair she just wanted to grab a hold to while he drove her up a wall. Literally.

Shelbi placed her belongings on one of the stainless steel prep counters and walked toward him, trying to shake herself from her fantasy, but her imagination was running rampant. She blew on the hot caramel before placing her lips on the spoon, and he slowly inched the tip of it into her mouth as his eyes held hers in an intense stare. She closed her eyes and moaned as the sweet caramel with a hint of cinnamon traveled down her throat. Her tongue licked over her lips.

“Justin, this is superb. What dessert are you making this for?”

“Haven’t decided yet, but it reminds me of you. Sweet, hot caramel with a touch of cinnamon, like your eyes.”

Blood rushed to her face, and she hid her expression by leaning over the stove to open the stockpot on the back burner. A New Orleans low-boil consisting of crabs, shrimp, hard-boiled eggs, potatoes, onions, and corn on the cob smelled heavenly.

“This looks and smells divine.”

“So do you,” he answered in a seductive tone before turning off all the burners on the stove and stepped toward her. He was close enough to kiss her, and she almost wished he would. After last night’s tossing and turning, she needed him to just hurry up and satisfy her longing. She stepped closer, and the enticing scent of his cologne mixed with his manly scent, filled her senses. She inhaled to take it in even more.

“Yes. Hopefully, it will make up for my store-bought barbecue sauce you didn’t enjoy when you dined here the other evening,” he responded sarcastically.

A heat wave of fury washed over her skin, and Shelbi became annoyed at the handsome chef.

“I know you aren’t flirting with me just to receive an excellent review because we can end this meeting now!” she snapped. She turned to gather her belongings.

“Look, lady, I don’t need some young contributing food critic telling me my homemade barbecue sauce taste like it came from the grocery store. If you thought that, then maybe I should bottle it!”

His comment forced more anger from her, and she turned toward him as she waved her finger in the air and rested her other hand on her hip.

“Well, then maybe you should bottle it along with your attitude.” She stepped into his personal space, refusing to back down, the anger seething through her body. “First of all, I like your restaurant. Otherwise, I wouldn’t have requested to meet the executive chef and owner. If I’d known he would be an arrogant, pompous jerk like you, I wouldn’t have wasted my time!”

Shelbi stared him down like a bull ready to send the matador flying across the ring with a swift blow to his butt. She hated being unprofessional; however, this man caused her to lose her cool. Heat rushed through her body, and apparently his as well, because she could feel the warmth radiating from him onto her skin. The room was silent except for their hearts beating fast and loud in sync.

He stepped closer to her. Too close.  Little beads of perspiration had formed on his face, drawing his manly, intoxicating scent out even more. His muscular chest rose up and down, and his dark, smoky eyes penetrated her, causing her breathing to stagger. His bold gaze held her entranced, and she couldn’t unlock it, no matter how hard she tried.