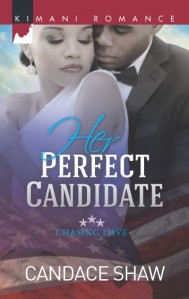 Co-owner of an up-and-coming interior-decorating firm, Megan Chase loves being a single woman on the fast track to success. But everything changes when a flat tire brings Georgia senator Steven Monroe into her life. The sinfully sexy politician needs the right woman to clean up his image. And with Megan’s fine eye for detail, she just may be the woman for the job.

Steven’s reputation as a player could cost him his chance at a U.S. senate seat. But when the cameras catch him and Megan in a kiss that’s all too real, it’s not only his future candidacy in jeopardy. As the lines between politics and desire begin to blur, how much will he risk to transform their passionate pretense into a landslide for love?

“The characters are engaging and endearing, and this story flows seamlessly (RT Book Reviews)”. 4 out of 4 1/2 stars. 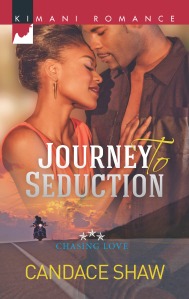 All the right moves

Ever since their families were joined by marriage, Sydney Chase has been driving attorney Bryce Monroe crazy. Whether she’s in biker gear or stilettos, no other woman can compare. No one else combines tough and tender in such a sexy, irresistible package. Though Syd has him pegged as a spoiled brat, a spur-of-the-moment Vegas road trip is Bryce’s one chance to prove otherwise.

As a criminal profiler, Syd’s job is to figure people out. Somehow, beyond Bryce’s privileged background is a depth she never expected. Their cross-country trek to a motorcycle fest is turning into the hottest ride of her life—one she knows has to eventually end. Yet what happens in Vegas is impossible to forget, and Bryce isn’t letting go until he’s crashed through every single one of her defenses…

“Shaw paints her characters as strong enough to go after what they want, yet weak enough to yield to temptation with little coaxing. This juxtaposition makes the tale endearing and pleasurable.”–RT Book Reviews 4  out of 4 1/2 star review on Journey to Seduction

Too tempting to resist

Luscious, tantalizing, delectable…and that’s just Tiffani Chase-Lake’s cupcakes. The moment Broderick Hollingsworth sets eyes on the sexy baker herself, he’s truly intrigued. For the first time, the wary real estate developer is ready to open up to someone. Then he realizes that his next business deal is going to leave Tiffani and her cozy bakery high and dry…

Just as hardworking single mom Tiffani is falling for Broderick’s easy charm, she learns about the property deal that will destroy her business. Even her most decadent dessert can’t eclipse the bitter taste of betrayal. Tiffani’s livelihood and her independence are on the line. Walking away from their sensual chemistry won’t be easy—but is trusting him a recipe for heartache?

“Strong from start to finish, the novel features heated lovemaking, rich dialogue, and strong main and supporting characters.” RT Book Reviews 4 out of 4 1/2 stars review on The Sweetest Kiss

Instead of falling apart when her childhood sweetheart chose his music career over marriage, Elle Lauren fled to Paris to study fashion design. Her stunning wedding gowns now give other brides the happily-ever-after she didn’t have. Ignoring Braxton Chase’s long-distance apologies has been easy. But seeing him once more stirs the deep longings and desires that a decade has not erased.

Braxton walked away from the pressure to marry at a young age, and he’s regretted breaking Elle’s heart ever since. From the moment he sees her again at his Atlanta jazz club, he knows he wants more than forgiveness—he wants a second chance at the heart-and-soul connection that they once had. Can he convince her to trust the sweet, seductive melody of their lost love?

Chasing a dream of love

The pursuit of love has always been high on Preston Chase’s priority list. But the video game developer has yet to find the soul mate he craves. His sister’s best friend—artist and studio owner Blythe Ventura—is a world away from the shallow glam girls who’ve thrown themselves at him. With her creative spirit and passionate commitment, she’s the ideal candidate for his Winter Wonderland project. Too bad she doesn’t seem interested in being the one to win his heart.

After a string of dating disasters, Blythe isn’t ready to believe in a romantic relationship with Preston. Until their work giving sick children hope and joy for Christmas brings them together—and reveals a very different side of the notorious millionaire playboy. All she has to do is trust in the feelings Preston is awakening and this just might be the year that they both find the happy holiday ending they’ve been searching for …

#teasertuesday
Happy Mother's Day! I hope you all have a fab day!
THE LAST DAY!
#kindleunlimited #throwbackthursday
Loading Comments...